How Traveling and History Have Inspired My Writing 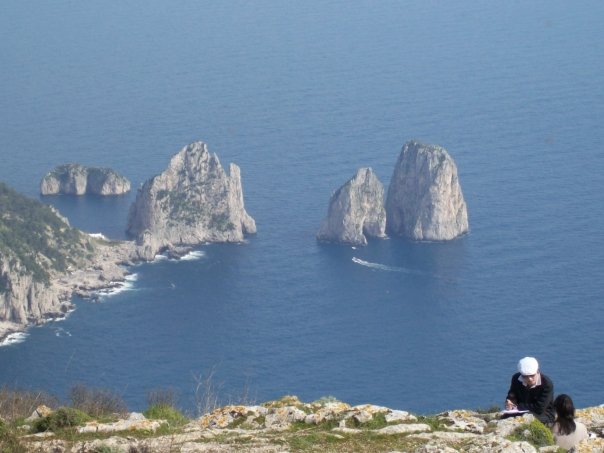 I am a writer, which for me I define like so: someone who enjoys putting words on paper and telling a story. I have been writing since I learned to construct sentences. And when I switched my major in college from English to Economics (temporary moment of insanity) to History—some were surprised by my choice. If I wanted to pursue writing, why was I studying the American Revolution or the Fall of Constantinople? Why would I study Social Sciences in graduate school and teach World History? If I wanted to be a writer—why was I not teaching English, at the very least?
I love reading (obviously), but I also find the greatest stories to be all around us. Our present is intricately entwined with our past as history continuously repeats itself (aka- people keep making the same mistakes). I find it interesting to learn about what makes people tick. Why people did the things that they did. I wonder how we prevent some of those mistakes, especially when I walked around a concentration camp in Germany.
Ever since I was a kid, I would obsess about history. I would sit in my backyard and imagine the people who might have once lived on the same land a hundred or two hundred years prior—it just always fascinated me. My imagination would run wild inventing stories of what life was like. And when I discovered the subject of history during elementary school, I finally had some facts to weave into the stories I created in my head.
So, of course many of my first attempts at novel-writing were based on history, and I read a lot of historical fiction. But as I grew up, my tastes in genres changed, but my interest in history, in other cultures—in the world, never went away.
The first time my travels really inspired my writing was when I went to London by myself. I had just turned twenty-one and had never been outside the U.S/Canada, and I was in a bit of a cultural shock. And I am talking about going to a country where they even speak the same language (but way sexier)! So, there I was, studying business (this was during my temporary crazy economics major idea) at Middlesex University for a summer program, and I found myself inspired. You know, the kind of inspiration that shocks your system in almost a Taser-like way … and I finally felt like ‘yeah, I can do this—I can write again. I don’t need to wait until school is out to start writing. I can make time now.’ And after ten days of traipsing about the city of London, exploring the blend of old and new, I found myself in for another shock: terrorism.
My mom was scared of me going to England. She said to me: “What if a terrorist attack happens?” We were still (and forever will be) raw from 9/11. I, of course, told her: “I will be fine. It won’t happen.” But it did. Summer of 2005. In London. Same subway I had just used.
These experiences shape you and make you who you are. The shock of what happened was substantially greater to my system than the writing bug that had bitten me. My study abroad ended abruptly, and I flew back home, trying to process what had happened, and knowing my desire for writing would be tucked back away.
It would take a few more years before I would venture back out into the world. I found my inspiration to write again on my travels to Italy. I am fortunate enough to have an incredible uncle who was stationed in the military in Naples. He met and fell in love with the most charming and sweet Italian woman on the planet (and of course stayed there). They showed me all over, introducing me to all things Italian. I fell in love with the country. Walking the stony streets of Rome and seeing the history on every street, making a wish for love in the famous Trevi fountain (and having my wish come true a few months later), watching the sun slip into the sea at the Isle of Capri, or visiting Pompeii where Mount Vesuvius destroyed a village so long ago … well, let’s just say my fingers burned from typing so much the second I arrived back on U.S. soil. But I wrote poetry, with no intention of publishing—but at least I was writing again.
And as I mentioned before, I found love shortly after my return from Italy. I highly recommend making a wish in the Trevi Fountain if ever in Rome. Considering my love of history and traveling, I had the tendency to always date foreigners (loved the accents), and it was a foreigner I wound end up marrying. It was my husband and our trips around the world that pushed me even closer to pursuing my dreams.

One of the most beautiful and inspiring places I have ever visited was Turkey. It helps to have a personal tour guide of a husband to show you all the ins and outs of a country! But really, there is so much history carved throughout the land that it is almost impossible not to be enamored by the country, particularly Istanbul. Standing in the Hagia Sophia and witnessing the blend of Christian and Islamic culture was mesmerizing. Breathing in the fresh flowers that artistically decorate the city before entering an underground Bazaar and haggling with dealers was an adventure.
And inspiration hit when my husband and I drove down the Romantic Road in Germany (yes, there is actually a road named that… well, in German)—and the name lived up to its promise!
Or feeling the sand beneath my feet while walking along the Mediterranean in Spain, and then watching the famous Flamenco dancers move in the night in Barcelona … how does inspiration not hit you?
I have been to many amazing places, and I am not trying to brag about my experiences to travel the globe—my husband and I would rather save money for an adventure then have a luxurious wardrobe or fancy car. Thankfully we both have that in common! But what I am trying to say is that my travels have opened my eyes to different languages, religions, customs, and so forth—my experiences have given me a deeper insight into life beyond my zip code, and my travels have truly inspired my writing. Not so much in the literal sense, as I am writing romantic suspense novels (a far stretch from some deep expose on Russia’s Putin) … but I am sure my characters will eventually find themselves in all corners of the world, and I hope to do justice to the people and places I write about.
So, history and traveling have been inspirations to my writing. What about you? If you are a writer, what are your inspirations? I would love to hear about them!