My Fourth Trip to Istanbul 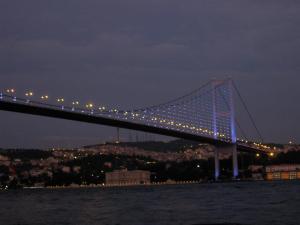 I am flying to Istanbul, Turkey today. It will be my fourth visit, and I am super excited, but also nervous to be traveling there during an election. It can get a little crazy in Istanbul around these times. I am anxious to see family and have my son (his second trip) absorb more of his culture—after all, he is half Turkish.
I am not sure if Americans are very familiar with Turkish people. I myself was familiar with Turkish history (being a history major)—but I never really gained in-depth insight to Turks until I married one.

Misconceptions.
People have a lot of misconceptions about people. Maybe I even had some about Turkey before I went there. I was surprised to see the streets flooded with modernity (thanks to Kemal Ataturk- the founder of Turkey, who modernized and industrialized the nation after the fall of the Ottoman Empire). The city of Istanbul is like none other. It boasts one of the highest populations in the world, but it also houses rich history and scenery that can leave one mesmerized. It is a city nestled on two continents—kind of cool to cross a bridge within the same city (bridge shown in top image) and go from Europe to Asia. I can now say I have been to Asia—although I hope I actually get to explore Asia in-depth some day . . . .
Anyways, enough of my rambling about my love of Istanbul –coupled with a few history notes. While I visit (will be there just shy of 2 weeks), I am worried about my access to the Internet. So if I become invisible until mid-June, I apologize. But I will try to reach out to fellow bloggers, if anything, to stay up to date, on the blogs I follow.
I will probably have to put a hold on editing my current novel. Maybe a 2-week break from it will bring new clarity when I get back. The good news about taking a break from my current WIP is that I can focus on finalizing the plot details for my next book. I don’t need a computer for my brain to work! I can also do research while in Istanbul. A few major scenes from my next book (toying with the titles of either: One Night in Istanbul (or) A Night in Istanbul) take place in the city. An important scene will take place in one of the nightclubs along the Bosporus Strait (a beautiful waterway—that is seen as the international trading zone of the area). Due to my pregnancy, I doubt I will be checking out the club in person though—not a fan of being at a bar when pregnant! So, I will have to rely on friends and family to describe the details (as well as images from the club’s website). I know it might sound crazy to use actual places (instead of inventing ones)—especially since I don’t include names—but I like to add a couple real places in my writing. I love when I am reading about an area I know—and I think: “Hey, I bet I know the place the author is describing!” –Maybe I am just a dork like that.
Well, I best get packing my bags. I have about sixteen hours of traveling time (including a 5-hour layover in Munich, Germany) to look forward to. But at least my 2-year old gets his own seat on the flight. I am just crossing my fingers that he sleeps most of the way.
Until next time . . . .