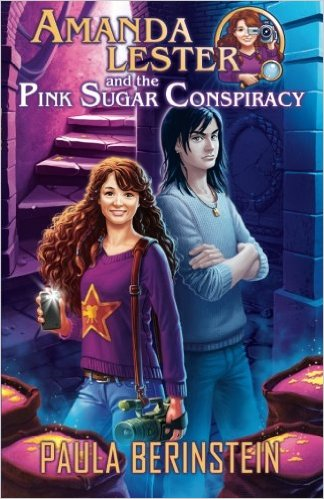 I am happy to introduce author Paula Berinstein as a featured author. She writes middle grade/YA novels–and I have to say, I love the bright and bold book covers! I know that I’ll be getting these books for my sons when they get a little bigger!
Blurb:
A reluctant detective, a criminal mastermind, and . . . sugar?
Amanda Lester wouldn’t be caught dead going into the family business. Her ancestor, Sherlock Holmes’s colleague Inspector G. Lestrade, is a twit. Nevertheless her parents refuse to see his flaws, and she’s going to a secret English detective school for the descendants of famous detectives whether she likes it or not.
When Amanda arrives at the dreaded school, she considers running away–until she and her new friends discover blood and weird pink substances in odd places. At first they’re not sure whether these seeming clues mean anything, but when Amanda’s father disappears and the cook is found dead with her head in a bag of sugar, they’re certain that crimes are taking place.
Now Amanda must embrace her destiny and uncover the truth. The only snag is that arch-villain Blixus Moriarty, a descendant of Holmes’s nemesis Professor James Moriarty, might be involved, and he doesn’t like nosy little girls interfering in his business. 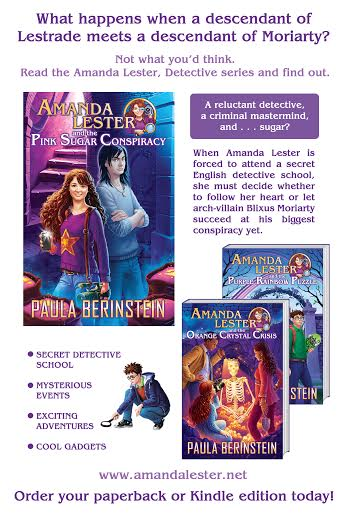 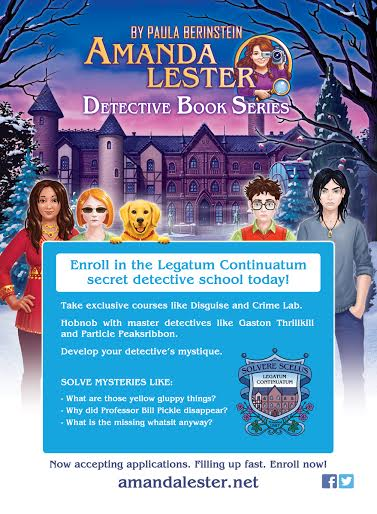 Author bio
Paula Berinstein is nothing like Amanda. For one thing, she’s crazy about Sherlock Holmes. For another, she’s never wanted to be a filmmaker. In addition, compared to Amanda she’s a big chicken! And she wouldn’t mind going to a secret school at all. In fact, she’s hoping that some day she’ll get to build one.
Social media links