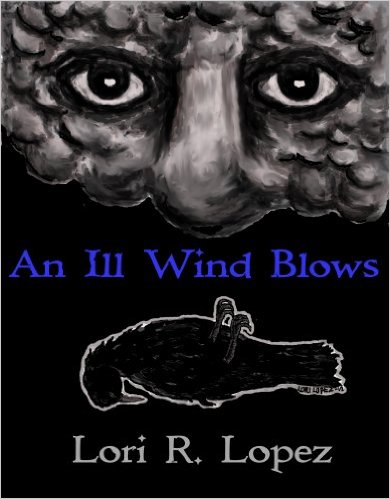 I have the honor to introduce a talented author, Lori Lopez. Lori has many books out in the marketplace right now. She is taking the book world by storm, and I am proud to share her work, particularly, An Ill Wind Blows, with my fellow readers.

AN ILL WIND BLOWS is a quirky fantasy-horror adventure about finding yourself and other things lost.

One night an ordinary person lacking confidence must battle a wicked wind.  The stakes are high as she, along with friends and foes, travels through a magical storm world that culminates in a ghost town populated by more than just spirits.  From the time the characters are sucked into the storm, the reader is transported with them on a strange chaotic trek.  Supporting characters, a mixed and quirky bunch of allies or villains, each have their own insightful stories.  Facing fears and the power of friendship are important themes. An unusual nonstop adventure of thrills and laughs in search of a magic stone while lost in a stormworld.

What are readers saying about An Ill Wind Blows ?

“A beautifully written story that reminded me of The Wizard of Oz and A Wrinkle in Time. Loved these kinds of sci-fi journeys when I was a kid. The kind of story where you were swept up with the heroine and walked beside her as she battles the ogres, elves, demons and other monsters as she is looking for a magical stone to help her explain the death of her parents. Very nicely done Lori. Will read this one again and again.”
“It’s like Michael Moorcock wrote Alice in Wonderland”
“I purchased this book through Amazon as I admire Lori as a human being and a woman – but I do admit some of her stories tend to fly over my head with her choice of words 😉 An Ill Wind Blows is not one of them, as she holds back a *little* while still maintaining her unique style and humor. This is to me, a whacky Alice in Wonderland kind of story, and I want to explain why I mentioned Michael Moorcock. Any fan of Moorcock’s work knows about the multi-verse he presents in the Eternal Champion series, in which he – like Lori – places characters in dangerous events that are literally out of this world. If anyone remembers the strange “lake of voices” in Moorcock’s world – then you will love an Ill Wind Blows. You get this kind of queasy feeling in your stomach while you read it and you can’t stop because for some reason, you like feeling as weird as the situation the character’s are facing. Combining first person narrative through the main character Meezly- and separate chapters in a third person/omniscient style arc for Meezley’s friends (and enemies) all of the characters find themselves transported by a malevolent entity into this strange universe – where, during the course of navigating it – find both themselves, and what they’re made of. The plot is simplistic yet complicated – Meezly must discover an object that is related to the death of her parents – and this malevolent entity – desires the object. What follows is a blend of horror, humor, and a journey of the self in an attempt to escape this creature’s attempt at thwarting her goal. I truly enjoyed the wit presented in this tale – my favorite and as example to those thinking about picking up this book, and a nod at the author’s note that certain forms of spelling in this book are intentional.”

E-BOOK:http://www.amazon.com/An-Ill-Wind-Blows-ebook/dp/B008397NO6
http://www.amazon.co.uk/dp/B008397NO6
http://www.barnesandnoble.com/w/an-ill-wind-blows-lori-r-lopez/1112474240
https://www.smashwords.com/books/view/214330
ILLUSTRATED PRINT EDITION:http://www.amazon.com/Ill-Wind-Blows-Lori-Lopez/dp/1484097734
http://www.amazon.co.uk/Ill-Wind-Blows-Lori-Lopez/dp/1484097734
Special Excerpt:
A rogue wind trickled beyond my hunched form . . . gathered twigs, decaying leaves, dried grass and weeds. A creature rose, assembled out of such debris, and stood before my path. As he contemplated me, his joints were lashed, knotted by serpentine vines. He was jagged, splintered, shoddily constructed. But a drab aura of twilight intensity surrounded him.
Facing this pillar of roughage, I had no fear. I had no adrenaline. It was all depleted. I stared forth in a fatigued state of readiness. I guess you could call it confidence. Or craziness. Maybe it was both. I believed not in myself but in my bag. A modest canvas sack.
The Rickety Man was poised like a gunslinger, as if we were engaged in a showdown. A duel to the finish. A clash of wills and won’ts. There was nothing complicated about it. We were here because we had to be. We had to do this. Although neither of us knew why. He would draw his figurative six-shooter. I’d coolly reach inside the bag. One of us would march away, the other fall. It was a tale already written. We were letting the scene play out.
“Wheeeeere?” A moaning wheeze sieved through the effigy’s frame.
For once I had no questions. Nor did I have the answers. His stick hand went for it. My right hand dove. My expression was stolid. He was a mere obstacle. I was three miles from my goal. Unflinching, unswerving, I refused to die by a nonexistent bullet fired from an imaginary gun aimed by a quixotic man of the mulch! There wasn’t a trace of doubt in my mind, however, that the menace was genuine.

Who is Lori Lopez?

Lori R. Lopez wears many hats, literally and otherwise.  She dips her pen in Speculative Fiction, Horror, Fantasy, and any number of genres combined.  Lori is the author of THE DARK MISTER SNARK, ODDS AND ENDS:  A DARK COLLECTION, CHOCOLATE-COVERED EYES, AN ILL WIND BLOWS, THE MACABRE MIND OF LORI R. LOPEZ, POETIC REFLECTIONS:  THE QUEEN OF HATS, DANCE OF THE CHUPACABRAS, OUT-OF-MIND EXPERIENCES, THE FAIRY FLY, MONSTROSITIES, JUGULAR and more.

A resident of Southern California, she is an author, poet, artist, actress, songwriter, musician; also an activist for conservation, children and animal rights.  You can find her “Poetic Reflections” column at Fairy Fly Entertainment, a website shared with two talented sons.
Stories and verse have appeared on Hellnotes and Halloween Forevermore, Servante Of Darkness and Verto Publishing; in THE HORROR ZINE MAGAZINE, THE SIRENS CALL E-Zine and anthologies such as JOURNALS OF HORROR:  FOUND FICTION, DEAD HARVEST, HWA POETRY SHOWCASE VOLUME II, TERROR TRAIN I and II, TOYS IN THE ATTIC:  A COLLECTION OF EVIL PLAYTHINGS, CURSED CURIOSITIES, CELLAR DOOR III:  ANIMALS (Editor’s Choice Award winner), BONES II, UNDEAD LEGACY, GHOSTS:  REVENGE, WE ARE DUST AND SHADOW, INDIANA HORROR REVIEW 2014, MIRAGES:  TALES FROM AUTHORS OF THE MACABRE, MASTERS OF HORROR:  DAMNED IF YOU DON’T, DARLINGS OF DECAY, I BELIEVE IN WEREWOLVES, THIRSTY ARE THE DAMNED, and SCARE PACKAGE:  14 TALES OF TERROR.  Fifteen of her poems were published for an anthology titled IN DARKNESS WE PLAY.

Lori has received various honors for her writing and art.  She was named on an Examiner.com list of “93 HORROR AUTHORS YOU NEED TO READ RIGHT NOW” for WOMEN IN HORROR MONTH 2014, and was featured on Horror Addicts and Promote Horror.com for WOMEN IN HORROR MONTH 2015.  She unapologetically takes pride in creatively bending and reshaping the rules of writing when it suits her style.

Thank you again for checking out this feature on Lori. Stop over on Amazon and check out her work!